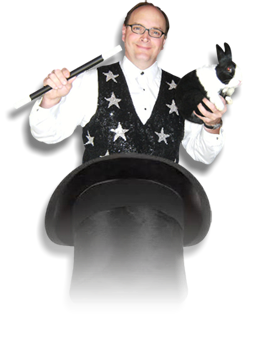 In 2010 Tommy was voted KIDabra International

Family Performer of the Year!

"There is nothing else on Earth I'd rather be doing.

Tommy began his career at the tender age of just 14 years old. He performed for the local 4H clubs, libraries and civic groups as well as his Grandmother's Grange hall in Cumberland RI. With over 30 years of performing experience behind him he has established himself as one of the premier kid-show magicians in the world and currently markets his own magical inventions as well as instructional DVD's to other magicians around the globe.

His current schedule has him performing 350-400 shows each year all over the New England area.

Tommy currently resides with his wife Michelle in Norfolk, Massachusetts. He has three children, Michael, Matthew and Marisa.